Christian Okoye net worth: Christian Okoye is a Nigerian-American former professional football player who has a net worth of $2 million. Christian Okoye was born in Enugu, Nigeria in August 1961. He was a fullback who played college football at Azusa Pacific University. Okoye was drafted #35 by the Kansas City Chiefs in the 1987 NFL Draft. He played his entire career with the Chiefs from 1987 to 1992. Okoye won the Ed Block Courage Award in 1998 and was named the 1989 UPA AFC Offensive Player of the Year. He was the NFL Rushing Leader and an All-Pro in 1989 and was a two time Pro Bowl selection. After becoming known for his powerful running style with tackle breaking ability, Okoye chose to end his career voluntarily due to his multiple injuries. After retiring he invested in the Golden Baseball League and owned Okoye Health and Fitness. Okoye founded the California Sports Hall of Fame and serves as president. He competed on the CBS reality television series Pirate Master and started the Christian Okoye Foundation. 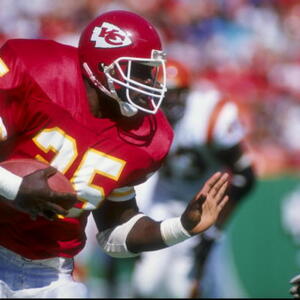