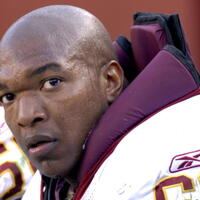 Chris Samuels Net Worth and salary history: Chris Samuels is a former American college and professional football player who has a net worth of $17 Million. Born on July 28, 1977, in Mobile, Alabama, Samuels served as an offensive tackle in the National Football League (NFL) for ten seasons. While attending the University of Alabama, Samuels played for the Alabama Crimson Tide football team (1996 – 1999), and was recognized as an All-American. Being considered the premier offensive tackles prospect in the 2000 NFL Draft, he was selected third overall by the Washington Redskins in the NFL Draft that year. He played his entire pro career for the NFL's Washington Redskins and became a six-time Pro Bowl selection. Samuels immediately became the starting left tackle for the Redskins and was one of only four players on offense to start every game in 2000. Later on, he accomplished nearly every goal possible for an offensive lineman. Samuels was named first-team All-SEC, won the Jacobs Award as the SEC's most outstanding blocker, won the Outland Trophy for the nation's best interior lineman, as well as he won an SEC Championship in 1999. An injury related to his condition, spinal stenosis, forced him to retire from the sport on March 4, 2010. But he continued his post-playing career on the field again, but this time as a coach. During the 2005 off-season, Chris signed a 7-year $47 million contract with the Redskins that came with a $16 million signing bonus. It was the largest bonus in Redskins history at the time. Total guarantees were $19 million in the contract which was relatively unprecedented for the NFL. He earned a total of $23 million over the first three seasons of the deal.