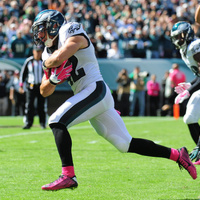 Chris Maragos net worth: Chris Maragos is an American football player who has a net worth of $6 million. Currently, he plays as a safety for the Seattle Seahawks. Chris Maragos was born on January 6, 1987 in Racine, Wisconsin. He played football and track for three years at Park High School before transferring to Horlick High School for his senior season. After graduating, Chris Maragos enrolled at Western Michigan, where he learned from established wide receiver Greg Jennings. After playing in eight games his redshirt freshman season, Maragos transferred to Wisconsin. With the Badgers, he switched from wide receiver to free safety. In two season with Wisconsin, he finished with 94 tackles and five interceptions and scored on a fake field goal attempt in 2009. After going undrafted during the 2010 NFL Draft, Maragos signed with the San Francisco 49ers. After playing sparingly during the 2010 season, Maragos was released in 2011. He was soon signed by the Seattle Seahawks, and has played intermittently with them, routinely winning "Special Teams Player of the Week" honors for the team. Maragos was a member of the Seahawks' team that won the NFC Championship and played in Super Bowl XLVIII.