Chris Kemoeatu Net Worth: Chris Kemoeatu is a Tongan professional football player who has a net worth of $5 million. Chris Kemoeatu was born in Pule'anga Fakatu'I'o, Tonga in January 1983. His older brother is Ma'ake Kemoeatu who played for the University of Utah and the Baltimore Ravens, Carolina Panthers, and Washington Redskins of the National Football League.

Chris played football at Kahuku High School and led the team to their first state championship. In 2000 Chris was named Hawaii High School Defensive Player of the Year. He attended the University of Utah and began played offensive guard and was named an All-American in his senior year. Kemoeatu was drafted #204 by the Pittsburgh Steelers in the 2005 NFL Draft. With the Steelers he won two Super Bowl Championship and three AFC Championships. After Super Bowl XLIII Chris was re-signed to a five year contract but later released in 2012. He received a kidney transplant from his brother Ma'ake in August 2014. He has not officially retired and is still considered a free agent. 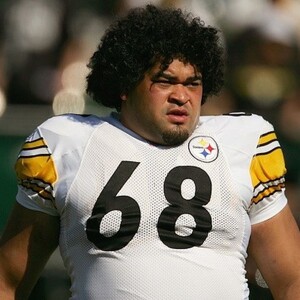