Chris Cooley Net Worth: Chris Cooley is an American retired professional football player who has a net worth of $8 million. Chris Cooley was born in Powell, Wyoming in July 1982. Chris lettered in football, baseball, and wrestling at Logan High School in Logan, Utah. As a wrestler he had a 54-0 record and won the state championship and All-America honors in his senior season. As a tight end Cooley played for Utah State University where he led the NCAA in receptions by a tight end in his senior season. He was also a First-team All-Sun Belt player in 2003. Cooley was drafted #81 by the Washington Redskins in the 2004 NFL Draft. He spent his entire career with the Redskins from 2004 to 2012. In 2007 he signed a six year contract extension worth $30 million. During his NFL career Cooley was two time Pro Bowl selection in 2007 and 2008. He was also named All-Pro in 2005 and is the Washington Redskins All-Time Leader in Receptions at Tight End with 429. After retiring he joined the Redskins' radio broadcast team as an analyst and also co-hosts a sports radio show on ESPN 980 in Washington D.C. 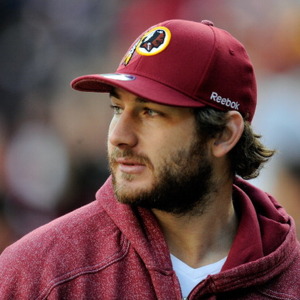