How much is Chris Chambers Worth?

Chris Chambers Net Worth: Chris Chambers is an American retired professional football player who has a net worth of $11 million. Born in 1978 in Cleveland, Ohio, Chris Chambers played college football for the University of Wisconsin Badgers. He started 33 games for Wisconsin, where he majored in law and sociology, and played on the Badgers' men's basketball team. Chambers won a Rose Bowl while playing for Bucky. The Miami Dolphins chose Chambers with the 52nd overall pick during the second round of the 2001 NFL Draft. The six-foot wide receiver was one of the best rookies in Dolphins history. He played in Miami from 2001 until 2007 and earned Pro Bowl honors in 2005. Two years prior, he led the AFC in receiving touchdowns. Chambers was traded to the San Diego Chargers in exchange for a draft pick. The Chargers released him midway through the 2009 season after a disappointing campaign. He landed with the Kansas City Chiefs on waivers and earned a three-year, $15 million dollar deal with the team following the 2009 season. Chambers was released in 2011 and has not played since. He finished his professional career with 540 catches for 7,648 yards and 58 receiving touchdowns. He has been married to his wife, Stacey Saunders, since 2010. 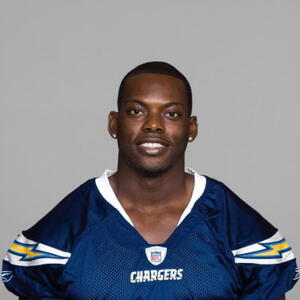