What is Carson Palmer's Net Worth and Salary?

Carson Palmer is an American football player who has a net worth of $90 million. During his 15 seasons in the NFL, Palmer played for teams like the Cincinnati Bengals and the Arizona Cardinals. After he led the Bengals to a string of strong results, a dip in form caused him to leave and play for the Oakland Raiders. After just two seasons, he moved once again to the Arizona Cardinals. During his last five seasons in the NFL, Palmer continued to play well. However, injuries continued to affect his performances, and he retired in 2017 after spending much of the season on the bench. He earned $174 million in salary alone during his NFL career.

Carson Hilton Palmer was born on December 27th of 1979 in Fresno, California. Carson grew at a remarkably fast rate and was much stronger than his peers by the time he had reached seventh grade. Seeing the boy's potential, Carson's father enrolled him in private classes with Bob Johnson, a self-described "quarterback guru."

During his high school years, Palmer played as a quarterback and soon generated considerable buzz from colleges who were desperate to attract him. By the time he had graduated, Carson had become an incredibly talented young quarterback. In 1998, he chose to attend the University of Southern California and play for the Trojans. Although he spent a great deal of his first season as a backup quarterback, Carson gained the starting position in his second year. However, a broken collarbone forced him to sit out almost the entire season after just a few games.

He had more luck during his junior and senior years, and he played his last game against Iowa in the 2003 Orange Bowl. He also left the University of Southern California as the recipient of the Heisman Award.

After being selected first overall by the Cincinnati Bengals, Palmer signed a six-year, eight-figure contract worth about $43 million. Despite the buzz that surrounded Carson, he spent the first season watching and learning from veteran QB Jon Kitna, who had signed as a free agent in 2001. However, he only had to wait until 2004 until he was given a shot as the starting quarterback. Things started a little rough, and Palmer's performance was called into question.

His passer rating proved somewhat inconsistent over the next period, and things became even worse when he sprained his knee. This forced him to drop out for the rest of the season, and he had to wear a knee brace for the rest of his career after this point. Despite these injury woes, Palmer led the Bengals to a successful season starting in 2005, and the team won the AFC North division with their first winning season since 1990.

During the 2005 season, Palmer threw 32 touchdown passes and became one of the best quarterbacks in the league. After throwing a record-breaking 66-yard pass against Pittsburgh, Carson took a devastating tackle to the knee that threatened to end his career. He suffered tears to his ACL and his MCL, as well as a displaced kneecap. After reconstructive surgery, Palmer somehow managed to return for the 2006 preseason. Despite suffering such a serious injury, Carson played extremely well and threw for a career-high 440 yards. He finished the season with the Pro Bowl MVP Award.

Over the next few years, Palmer's form slowly declined, and the Bengals' performances dropped considerably. In 2010, Carson officially requested to be traded, sparking controversy. He was quoted as saying that he never wanted to set foot in the Bengals stadium again. Despite his strong opinions, the team ownership refused to let him go and held him to his contract. Palmer was only allowed to leave when he threatened to retire and stopped showing up for training.

After he was finally allowed to leave the team, he played two seasons with the Oakland Raiders, although he didn't have much success there, either. In 2013, he joined the Arizona Cardinals on a $16-million, two-year contract. After a number of semi-successful, injury-prone years, Palmer retired in 2018. 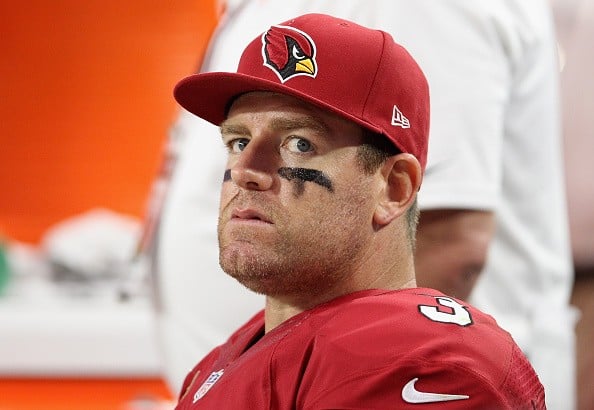 In 2005, Palmer inked a 6-year contract extension worth $118.75 million with the Bengals. In 2015, he was earning an estimated sum of $29 million per year. All in all, Carson reportedly raked in over $174 million in contract money during his 15-year NFL career.

In 2003, Carson Palmer married Shaelyn, a former USC soccer player. They met during their college years. Although the couple owns a number of properties around the nation, they currently reside in Idaho. In 2009, Palmer and his wife welcomed twins into the world.

In 2015, it was reported that Palmer was selling a property in Del Mar, California for $25 million. He originally purchased the property back in 2010 for $4.4 million. The 8,000-square-foot residence encompasses six bedrooms and eight bathrooms. Outdoor amenities include an infinity pool, a bocce ball court, and an open-air living room. Other features include five fireplaces and an oversized garage that can fit 10 cars:

In 2017, Carson successfully sold a different home in Del Mar for $5.8 million. In 2018, Palmer sold another property in the small, affluent town of Paradise Valley in Arizona. Carson settled on a final sale price of $2.9 million for the 6,800-square-foot residence, which features six bedrooms, a movie theater, a wet bar, and two separate garages.

In 2020, Palmer finally managed to offload his mansion in Del Mar for $18 million, despite listing it for $25 million five years prior. The buyer was none other than Bill Maris, a wealthy tech mogul who co-founded Google Ventures back in 2009.