How much is Carl Nicks Worth?

Carl Nicks Net Worth: Carl Nicks is an American professional football player who has a net worth of $8 million dollars. He is best known for his position as offensive guard for the Tampa Bay Buccaneers in the National Football League. Born in San Francisco, California on May 14, 1985, Nicks stands at six feet and five inches and weighs 349 pounds. He attended Salinas North High School as well as New Mexico State University, Hartnell College, and the University of Nebraska. Upon graduation, he was drafted by the New Orleans Saints as a Round 5, 164th pick in 2008 and debuted later that year. He played for the Saints from 2008 to 2011 and joined the Buccaneers in 2012. He was the First-Team CCC Coaches' All-American in 2005, a two-time Pro Bowl player in 2010 and 2011, a two-time All-Pro player in 2010 and 2011, a Super Bowl XLIV champion. Furthermore, Nicks received the Madden Most Valuable Protectors Award in 2009 and 2011, and was ranked at number 76 in the Top 100 Players of 2012. He has played a total of 73 games and has started 70 of them. 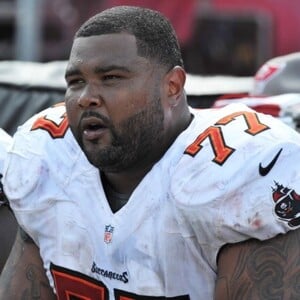