Calvin Johnson net worth and salary: Calvin Johnson is an American football wide receiver who has a net worth of $45 million and annual salary of $22.6 million. Calvin Johnson has earned his net worth playing in the National Football League which he entered in 2007. As of this writing, he plays for the Detroit Lions. He was born on September 29, 1985 in Newnan, Georgia. He was already 6 feet tall in middle school and up to 6'4 by the tenth grade. Johnson was educated at Sandy Creek High School located in Tyrone, Georgia where he was a Letterman for the school's football team. As a high school football player he was the starting wide receiver for three years, and the school retired his number #81 on October 22, 2010. Johnson was the Detroit Lions second overall pick in the 2007 NFL Draft, he is currently signed with the Lions in one of the largest extension contracts ever written, an 8 year for $132 million dollars. At Georgia Institute of Technology where he played football for the Tech's Yellow Jackets from 2004-2006, as a freshman he was a first-team All-Atlantic Coast Conference (ACC) selection. His college record at Georgia Tech stands a 2,927 receiving yards, two-time ACC Rookie of the Year 2004 and 2006, four-time ACC Rookie of the Week, Biletnikoff Award 2006, and Paul Warfield Trophy 2006. 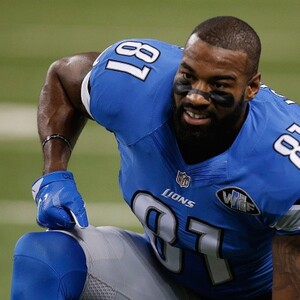