C.J. Beathard net worth: C.J. Beathard is an American professional football player who has a net worth of $3 million. C.J. Beathard was born in Franklin, Tennessee in November 1993. He is a quarterback who played at Battle Ground Academy High School. Beathard played his college football at Iowa where he won the Manning Award Quarterback of the Week and Big Ten Conference Co-Offensive POW in 2015. That same year C.J. Beathard also was named second-team All-Big Ten. He was drafted #104 overall by the San Francisco 49ers in the 2017 NFL Draft. C.J. Beathard started five games in both 2017 and 2018 for the 49ers and did not play in 2019. During his first two NFL seasons he had 225 completions for 2,682 passing yards, 12 touchdowns, and 13 interceptions along with 205 rushing yards and four rushing touchdowns. C.J. Beathard signed a four year deal with the 49ers in 2017 for $3.52 million and a signing bonus of just over $700 thousand. 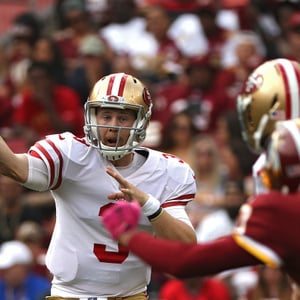