How much is C. J. Anderson Worth?

C.J. Anderson net worth: C.J. Anderson is an American football player at the running back position for the National Football League's Denver Broncos who has a net worth of $1.5 million. C.J. Anderson was born in 1991 in Vallejo, California where he rushed for nearly 4,000 yards while playing for Bethel High School. C.J. Anderson moved to running back as a senior after playing quarterback in an option offense his junior season . He was the Time Herald Athlete of the Year and a two-time Vallejo Times Herald MVP in high school. C.J. Anderson was the first Bethel player to sign with and play for a Pac-12 school. After high school C.J. Anderson enrolled at Laney College, a community college in Oakland, California where as a sophomore he was the Northern California conference leader in rushing with 1, 644 yards and 13 touchdowns. C.J. Anderson enrolled at the University of California, Berkeley where he played football for the Cal Golden Bears in 2011 and 2012. C.J. Anderson played in all 25 games and had two starts in his two seasons at Cal, finishing his Cal career with 1, 135 yards rushing on 198 carries for an average of 5.73 yards per rush. He had 12 touchdowns on the ground and one in the air with his longest collegiate career reception at 74 yards. At the 2013 NFL Combine, C.J. Anderson ranked among the best top running backs in the 20-yard shuttle, broad jump, and 40-yard dash. C.J. Anderson was undrafted during the 2013 NFL Draft and later signed by the NFL's Denver Broncos as an undrafted free agent. 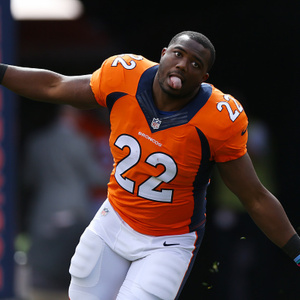