What is Brock Osweiler's Net Worth Salary and career Earnings?

Brock Osweiler is a retired American football player who has a net worth of $20 million. Brock Osweiler played for seven seasons in the NFL. He began with the Denver Broncos, serving as the starter during the team's 2015 Super Bowl-winning season, and then joined the Houston Texans. After that, Osweiler returned to the Broncos, and then played his final season with the Miami Dolphins.

Brock Osweiler retired from the NFL in October 2019. During his career he earned a total of $41,396,679. With a 15-15 record, he essentially earned $2.75 million per win. He never started a full season. He threw 37 touchdowns and 3 interceptions. He won a Super Bowl as a Bronco in 2015 serving as backup to Peyton Manning.

Brock Osweiler was born on November 22, 1990 in Coeur d'Alene, Idaho to Kathy and John, and was brought up in Kalispell, Montana. He has an older brother named Tanner. In Montana, Osweiler went to Flathead High School, where he played both football and basketball. At this time, he also went to neighboring states to play for Amateur Athletic Union basketball teams in Oregon and Washington. As a high school senior, Osweiler was named the Gatorade Player of the Year.

Turning down scholarship offers from Washington State and Stanford, Osweiler chose to go to Arizona State University. There, he became the first true freshman to start a Sun Devils game since 1993, when Jake Plummer had that honor. Osweiler finished the season with 24 of 55 passes for 249 yards with two touchdowns. In his sophomore year, he completed 62 of 109 passes for 797 yards with five touchdowns. Finally, as the starting quarterback his junior year, Osweiler finished the season with 4,036 yards and 26 touchdowns.

In 2012, Osweiler signed a four-year rookie contract with the Denver Broncos; he subsequently made his NFL debut in a Week 4 game against the Oakland Raiders, which the Broncos won 37-6. Later, in Week 17, Osweiler threw his first pass in a win over the Kansas City Chiefs. In his third season with the Broncos in 2014, he threw his first career touchdown in a game against the Raiders. The following season, Osweiler started in place of an injured Peyton Manning, and completed 20 out of 27 passes for 250 yards with two touchdowns in a victory over the Chicago Bears. For his performance, he was named AFC Offensive Player of the Week. Just a couple weeks later, Osweiler led the Broncos to an overtime win against the then-undefeated New England Patriots.

In December of 2015, Osweiler started his fifth straight game against the Pittsburgh Steelers. He completed 21 of 44 passes for 296 yards and three touchdowns. Later, Osweiler started his sixth straight game against the Cincinnati Bengals, completing 27 of 39 attempts for 299 yards and a touchdown in an overtime victory. Osweiler finished the 2015 season with 170 completions out of 275 attempts. Additionally, he rushed for 61 yards on 21 attempts for another touchdown. Osweiler went on to be an active backup quarterback during Super Bowl 50, which was won by the Broncos 24-10 over the Carolina Panthers. 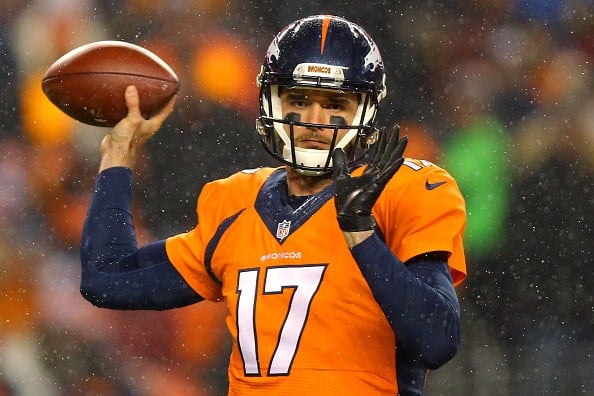 In March of 2016, Osweiler signed a four-year contract with the Houston Texans. He made his debut that September, passing for 231 yards and two touchdowns in a 23-14 win over the Bears. However, Osweiler struggled in subsequent games. In Week 15, he was benched for Tom Savage following back-to-back first-half interceptions. Two weeks later, Osweiler played in relief of Savage, and completed 21 of 40 passes for 253 yards and a touchdown. He finished the 2016 season with 2,957 passing yards, 15 touchdowns, and 16 interceptions.

Osweiler was traded to the Cleveland Browns in 2017; however, he was released later in the year when the team appointed rookie DeShone Kizer as its starter.

After being released from the Browns, Osweiler signed a one-year contract with his old team, the Denver Broncos. He started the team's Week 9 game in place of the benched Trevor Siemian, finishing with 208 passing yards, a touchdown, and two interceptions in a loss to the Philadelphia Eagles. Osweiler continued to play well over the season, including in a Week 15 game in which he relieved the injured Siemian.

Osweiler signed with the Miami Dolphins in 2018. In Week 6, he started against the Bears, and passed for 380 yards, three touchdowns, and two interceptions in a 31-28 overtime win. As a result of this, Osweiler notched a 4-0 career record in overtime games, a winning percentage that stands as an NFL record. He finished the season having played in seven games and posting 1,247 passing yards, six touchdowns, and four interceptions.

In the 2019 midseason, Osweiler officially announced his NFL retirement.

Osweiler wed Erin Costales in February of 2015; they had their first child, a daughter named Blake Everly, in April of 2017. Two years later, they had another daughter. The family resides in Arizona. 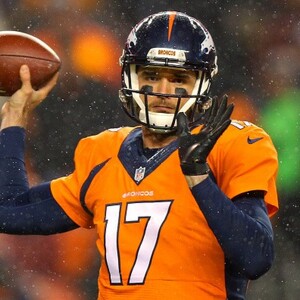