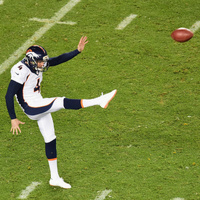 Britton Colquitt net worth: Britton Colquitt is an American football player at the punter position for the Denver Broncos who has a net worth of $19 Million. Britton Colquitt was born in 1985 in Knoxville, Tennessee. He is the son of former Super Bowl champion Pittsburgh Steelers punter Craig Colquitt, nephew of former NFL punter Jimmy Colquitt, brother of current Kansas City Chiefs punter Dustin Colquitt, and cousin of current Tennessee Tech punter Greg Colquitt. He attended Knoxville's Bearden High School where he played football and soccer. Britton Colquitt played college football at the University of Tennessee where he was the Volunteers' first team punter in the 2005, 2006, and 2007 seasons. Colquitt earned consensus first-team All-SEC honors in 2006, and second-team All-SEC honors in 2007. Despite his NFL punting family pedigree Britton Colquitt went undrafted in the 2009 NFL Draft. Britton Colquitt was signed to the Miami Dolphins' practice squad on December 22, 2009. Eight days later he was signed to the active roster of the Denver Broncos, where, in 2011 he made his mark in the NFL record books with 4,783 yards, the 5th all time single-season punting yards record. Britton Colquitt's career-to-date (through 2013 regular season) stats are: 319 punts, 14,616 punting yards for an average of 45.8 yards per punt.