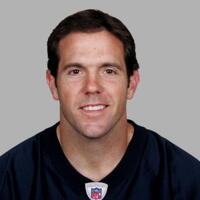 Brian Griese Net Worth: Brian Griese is a former American football player who has a net worth of $12 million. Brian Griese was born in Miami, Florida, in 1975. He played college football at the quarterback position for the University of Michigan Wolverines, where he won a national championship in 1997 and the Rose Bowl in 1998. Griese was inducted into the Rose Bowl Hall of Fame after passing for 251 yards and three touchdowns as the Wolverines knocked off Washington State. The Denver Broncos chose Griese with the 91st overall pick during the third round of the 1998 NFL Draft. He started as a third-stringer in the NFL until John Elway retired in 1999 and Griese took over the starting quarterback position. He played with the Miami Dolphins in 2003, the Tampa Bay Buccaneers from 2004 until 2005, the Chicago bears from 2006 until 2007, and the Bucs again in 2008. Griese went to the Pro Bowl in 2000 and won one NFC Championship in 2006. He finished is career with 19,440 passing yards, an 82.7 quarterback rating, 119 touchdowns, and 99 interceptions. After his retirement in 2009, he began working as an NFL analyst with ESPN and on the radio. He works with Denver's Judi's House, a grief support center for children., and earned the 2011 Patterson Award for Excellence in Sports Philanthropy. Griese and his father co-wrote the 2000 book "Undefeated". He has been married to his wife, Brook McClintic, since 2004.