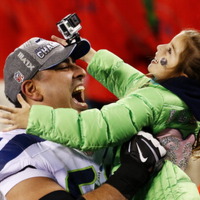 Breno Giacomini net worth: Breno Giacomini is an American football player who has a net worth of $9 Million. He currently plays offensive tackle for the Houston Texans. Breno Giacomini was born on September 27, 1985 in Cambridge, Massachusetts. Giacomini was a three-year started at Malden High School, playing both linebacker and defensive end, but took a year off to focus on basketball. After being persuaded by one of his high school coaches to return to football for college, Giacomini enrolled at Louisville. During his first two seasons with the Cardinals, he played at tight end. After gaining 61 pounds between sophomore and junior year, Giacomini was moved to right tackle, starting in two games his junior year. During his senior season, he started every game and was named second-team All-Big East. Breno Giacomini was drafted by the Green Bay Packers with the 150th pick (5th round) in the 2008 NFL Draft. He was mostly a practice squad player with the Packers, and in 2010 he was acquired by the Seahawks, though he was soon released thereafter. Prior to the 2011 season, the Seahawks resigned Giacomini, and he played in 15 games during the year. During the 2012 season, he started every game for Seattle, including both of their playoff games. Giacomini suffered a knee injury during the 2013 season, limiting him to only nine starts. He played for the Jets during the 2014-2016 seasons. He began playing for the Texans in 2017.