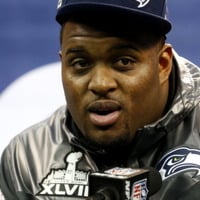 Brandon Mebane net worth: Brandon Mebane is an American professional football player who has a net worth of $16 Million. Brandon Mebane was born in Los Angeles, California, and went on to play college football for the University of California – Berkeley. The Seattle Seahawks drafted him in 2007, and he signed a four-year contract. He began playing for the team immediately, and quickly proved that he deserved to be on the field. He amassed 29 tackles and two sacks his first year with the team. He second year with the Seahawks, he upped that number with 39 tackles, 5.5 sacks, and 2 forced fumbles. 2009 saw him record 49 tackles and 1.5 sacks. In 2010, he started off well, with 8 tackles and 1 sack, but an injury forced him to sit out part of the season after the fourth game of the year. He has continued to play well for the team through his seventh year with the squad.