Brandin Cooks net worth and salary: Brandin Cooks is an American professional football player who has a net worth of $14 million. Brandin Cooks was born in Stockton, California in September 1993. He is a wide receiver who played at Lincoln High School. Cooks played his college football at Oregon State where he won the Biletnikoff Award and was named a consensus All-American and first-team All-Pac-12 in 2013.

He was drafted #20 overall in the 2014 NFL Draft by the New Orleans Saints. Brandin Cooks played for the Saints from 2014 to 2016. He played for the New England patriots in 2017 and joined the Los Angeles Rams in 2018. Cooks signed a four year deal with the Saints for $8.3 million in 2014. In 2018 he signed a five year deal with the Rams for $81 million with $20.5 million guaranteed. That was enough to make him one of the highest-paid players in the NFL. During his first five NFL seasons he had 360 receptions for 5,147 yards and 34 touchdowns. 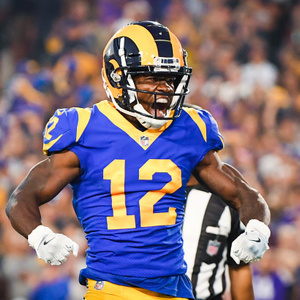