How much is Brad Johnson Worth?

Brad Johnson net worth: Brad Johnson is an American former professional football player who has a net worth of $15 million dollars. Brad Johnson was born in Marietta, Georgia and played football and basketball at Charles D. Owen High School. He was an All-American selection in football and an All-State selection in basketball. He went on to attend Florida State University, where he began his athletic career on the basketball team. He then began playing football second semester of his freshman year. He played well for Florida State, but was rarely the starting quarterback. The Minnesota Vikings drafted him in 1991, but he was used rarely for his first three seasons with the team. He spent a season playing for the World League in London, and then returned to the Vikings. He played well for the Vikings, but was not always consistent, and was eventually traded to the Washington Redskins in 1999. He went on to play for the Tampa Bay Buccaneers, and led them to a Super Bowl Championship in 2001. He then returned to the Vikings, and played one season for the Dallas Cowboys, before retiring in 2009. 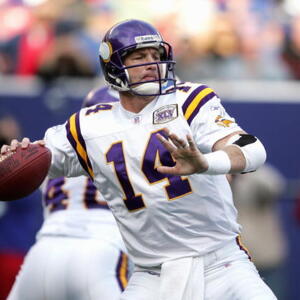