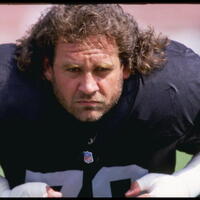 Bob Golic net worth: Bob Golic's net worth is $1.5 million dollars. Born in Cleveland, Ohio, Bob Golic distinguished himself as an athlete early on, playing for his high school football team successfully, while also winning the 1975 Ohio High School Heavyweight Wrestling Championship. After receiving an athletic scholarship to the University of Notre Dame, he further established himself as an athlete to watch, being named to both the football and wrestling All-American teams twice during his time at the school. He graduated from Notre Dame with a degree in Management, and was immediately drafted by The New England Patriots in 1979. He played for The Patriots until 1981, and then played for the Cleveland Browns until 1988. He played in the Pro Bowl three times while with the Browns, and then played four seasons with the Los Angeles Raiders. He retired in 1992, and then pursued a moderately successful acting career, while also working as a sports commentator. He is now Vice President of Football Operations for the Lingerie Football League team, the Cleveland Crush.