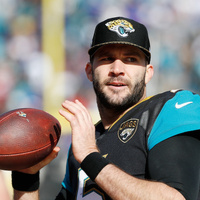 What is Blake Bortles' net worth? Blake Bortles is a retired American professional football player who has a net worth of $20 million. Blake Bortles was born in Altamonte Springs, Florida in April 1992. He is a quarterback who played at Oviedo High School. Bortles played his college football at the University of Central Florida where he was a Conference USA Champion in 2010, second-team All-Conference USA in 2012, and AAC champion, AAC Offensive Player of the Year, and first-team All-AAC in 2013. Bortles was drafted #3 overall by the Jacksonville Jaguars in the 2014 NFL Draft and has spent his entire career with the Jaguars. He holds several Jaguars records including most passing touchdowns in a season, most passing yards in a season, most pass completions in a season, most passing touchdowns in a game, and more. Blake announced his retirement from the NFL in October 2022.

In his rookie year, 2014, Blake signed a 4-year $20.6 million contract. In 2018 he signed a 3-year $54 million extension. During his career Blake Bortles earned a total of $48 million in NFL salary alone. He likely earned several million more from endorsements. Over the course of his career Blake played in 78 games. In other words, he earned $615,000 per game. In those 78 games he threw 75 interceptions.