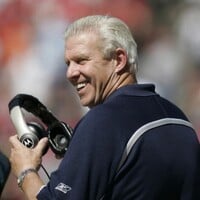 Bill Parcells Net Worth: Bill Parcells is a former American football head coach who has a net worth of $25 million dollars. Born in Englewood, New Jersey, in 1941, Bill Parcells attended Wichita State University as a linebacker and graduated with a degree in physical education. He was selected late in the seventh round of the 1964 NFL Draft by the Detroit Lions, but did not appear in any games for the team. He instead accepted an assistant coaching position at Hastings College before taking a position with his alma mater. Parcells coached at Army, Florida State, Vanderbilt and Texas Tech before accepting a head coaching job at Air Force. A year later, he returned to the NFL as the defensive coordinator for the New York Jets. Before Parcells coached a single game with the Jets, he left football all together to take an unrelated job in Colorado. Parcells' hiatus from the game lasted only a year and he became linebackers coach of the New England Patriots in 1980. Three years later, he accepted a job as head coach of the New York Giants, where he would win two Super Bowls in 1986 with a 14-2 regular season record and in 1990 with a 13-3 regular season record. Under Parcells, the Giants won the division three times and finished with an 8-3 playoff record. He retired and took a job as an analyst with NBC Sports from 1991 until 1992, then decided to return as head coach of the Tampa Bay Buccaneers. Prior to the start of the season, Parcells opted not to take the job after all. He returned as head coach of the New England Patriots in 1993 with an appearance in the 1996 Super Bowl. In 1997, he began head coaching the New York Jets and later retired in 1999. Parcells accepted a head coaching job with the Dallas Cowboys in 2003 after promising he wouldn't coach again following his stint in New York. The Cowboys made the playoffs under Parcells in his first season, recorded a losing season in 2004, and missed the playoffs in both 2005 and 2006. Though Parcells managed a winning record in Dallas, he was unable to guide the Cowboys to the playoffs, and retired in early 2007. Later that year, Parcells took a front office job with the Miami Dolphins as Executive Vice President of Football Operations. The two-time Super Bowl Champion is the only NFL coach to lead four teams to the playoffs and was inducted into the Pro Football Hall of Fame in 2013. The ESPN analyst was married to Judith Goss from 1962 until 2002.