Bernie Kosar Net Worth: Bernie Kosar is an American former football quarterback who has a net worth of $100 thousand dollars. Bernie Kosar was born November 25, 1963 in Youngstown, Ohio. Kosar played for the Cleveland Browns from 1985 to 1993 and finished his career with the Dallas Cowboys and the Miami Dolphins.

Kosar played college football at the University of Miami then, after much controversy throughout the drafting process, signed on with the Cleveland Browns in 1985. Times with the Cleveland Browns were not exactly shiny and full of accolades. Kosar's later years with Cleveland were dampened by injuries and dwindling support around the unlikely quarterback. To quite literally add insult to injury, in 1991 the Browns hired Bill Belichick as head coach. Not a big fan of Kosar, Belichick had signed quarterback Vinny Testaverde (Kosar's former college teammate) before the 1993 season. Early in the year, Belichick benched Kosar in favor of Testaverde. An injury to Testaverde returned Kosar to the field. From the Cleveland Browns, Kosar moved on to fill in for an injured Troy Aikman for the Dallas Cowboys and earned his only championship ring as a backup in the Super Bowl XXVIII. Kosar finished out his career with the Miami Dolphins as a backup quarterback to Dan Marino and is perhaps best remembered for a trick play that helped the Dolphins top the Jets in a crucial game late in 1994. With the clock winding down and the Dolphins trailing by three, Marino pretended to spike the ball to stop the clock. He then threw the winning touchdown pass to Mark Ingram. Kosar finished his 12-season career with 1,994 completions in 3,365 attempts for 23,301 yards and 124 touchdowns, with 87 interceptions. He also rushed for 265 yards and five touchdowns. Bernie Kosar held the NFL record for most consecutive completed passes without an interception, until December 26, 2010, when New England Patriots quarterback Tom Brady broke his record.

After retirement from football, Kosar moved on to other business ventures, such as opening a restaurant, becoming part-owner of the Florida Panthers (NHL), publishing a magazine and various philanthropic efforts. 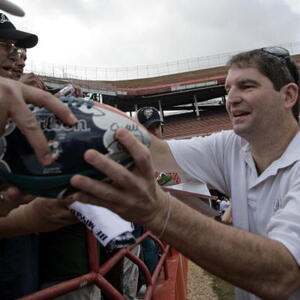