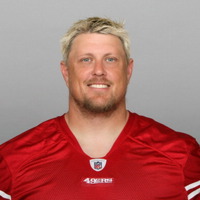 Barry Sims Net Worth: Barry Sims is an American professional football player who has a net worth of $12 million. Barry Sims was born in Wheat Ridge, Colorado, in 1974. He played college football along the offensive line at Utah before going undrafted during the 1999 NFL Draft. Despite not being chosen, Sims did earn a spot with the Scottish Claymores of the NFL European League, who chose him during the 17th round. After playing with the Claymores for a season, Sims landed a free agent contract with the Oakland Raiders and made his debut later that season as a rookie. The six-foot-five, 300-pound tackle and guard played with the Raiders from 1997 until 2007 before he landed with the neighboring San Francisco 49ers. Sims played in San Francisco from 2008 until 2010, and, as of the fall of 2014, has not played since, though he has not formally announced his retirement from the game. In 2005, Sims earned the Commitment to Excellence Award, given to the player who best exemplifies the pride and spirit of the Raiders. In 2004, he was inducted in the Claymores' Hall of Fame. Sims is involved in several charities in the Bay Area, including one that works with Northern California's Special Olympics. Sims is married to his wife, Shae, and lives near San Francisco.