Baker Mayfield net worth: Baker Mayfield is an American professional football player who has a net worth of $12 million. Baker Mayfield was born in Austin, Texas in April 1995. He is a quarterback who played at Lake Travis High School. Mayfield played his college football at Oklahoma and Texas Tech. In 2017 he won the Heisman Trophy, the Maxwell Award, the Walter Camp Award, the Davey O'Brien Award, and the Associated Press Player of the Year award.

Mayfield was a two time first-team All-American and a three time first-team All-Big 12 selection. He was drafted #1 overall by the Cleveland Browns in the 2018 NFL Draft. In 2018 he won the PFWA Rookie of the Year award and was named to the PFWA All-Rookie Team. In 2018 he signed a four year deal with Cleveland worth $32.68 million that came with a $21 million signing bonus. In his first year with the Cleveland Browns Baker Mayfield threw 27 touchdowns and 3,725 yards. 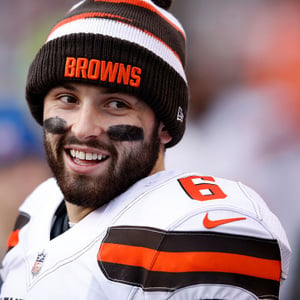