Arian Foster net worth and salary: Arian Foster is a former American professional football player who has a net worth of $50 million dollars. Arian Foster was born in Albuquerque, New Mexico in 1986 He excelled at football throughout his school years. After relocating to San Diego to live with his father during high school, he went on to be named the San Diego Union Tribune All-San Diego Western League Player of the Year, among other honors. After graduating, he went on to play football at the University of Tennessee. His time at Tennessee saw highs and lows, and his mixed performance left him only moderately popular with professional teams. He signed with the Houston Texans in 2009, and made his professional debut in November of that year. He broke out in 2010, and has since played excellent football with the Texans, setting multiple franchise records. He was the NFL Rushing leader in 2010, and was a 4-time Pro Bowl selection. During his career he played for the Houston Texans from 2009 – 2015 and then the Miami Dolphins for his final year in 2016.

Health Warrior investment: In October 2013, Arian Foster acquired a minority stake in a health bar company called Health Warrior, makers of Chia Bar. On October 31, 2018 it was announced that Health Warrior had been acquired by Pepsi. Over the previous years, Arian grew his initial minority to a reportedly "significant" stake. Unfortunately it's not clear yet how much Pepsi paid or Arian's final equity size. 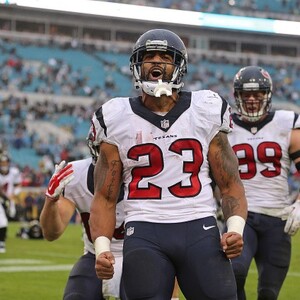