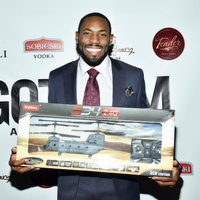 Antonio Cromartie Net Worth and Salary: Antonio Cromartie is a former American professional football player who has a net worth of $10 million. After starting his career with Florida State University, he was picked in the first round of the 2006 NFL Draft by the San Diego Chargers. Cromartie plays as a cornerback, and he became a first-team All-Pro in 2007 after making the most interceptions of any player in the league.

Although Antonio achieved a number of things during his career, he is perhaps best remembered for making the longest play in NFL history. This was when he ran 109 years to return a missed field goal. Outside of his time with the Chargers, he also played for the Arizona Cardinals, the New York Jets, and the Indianapolis Colts before finally retiring in 2018.

Early Life: Antonio Cromartie was born on April 15th of 1984 in Tallahassee, Florida. His family has Haitian heritage. During his high school years, he immediately showed his potential and recorded some amazing achievements, including being named the defensive player of the year by "USA Today." By the time he had graduated, he was considered one of the top six cornerback prospects in the nation. Outside of football, Cromartie joined the school's track and field team. He performed well in events such as the 110-meter hurdles, the 100-meter relay team, and the triple jump.

After graduating from high school, Antonio was given an athletic scholarship by Florida State University to play for the Seminoles under coach Bobby Bowden. Initially, it was quite a puzzle to figure out where to put Cromartie. He exhibited potential as a nickelback and a kick returner, and he even had the chance to play as a wide receiver during his junior year. However, he tore his anterior cruciate ligament before his third season and sat the entire year out. Outside of football, Cromartie joined the track team – much like in high school. He performed well at the 200 meters and the 400 meters, placing sixth in the prelims at the NCAA Division I Championships for the 400-meter dash.

Career: Cromartie began his professional career in 2006 after being signed by the Chargers. He started as a cornerback and immediately started making impressive returns – one as long as 91 yards. His second season was even better, and he won Defensive Player of the Week Award. He racked up tons of interceptions that year and set a number of franchise records. In 2010, he moved to the New York Jets.

By this point, he had started to play inconsistently and suffered a number of injuries. In 2014, he moved once more to the Arizona Cardinals. After this point, he never really regained the same level of performance as at the beginning of his career. Cromartie subsequently ended his career with the Jets and finally the Colts before retiring in 2018.

By his own estimate, Antonio wasted $5 million during his first two seasons in the NFL. However, he has admitted to toning down his wild spending in recent years.

Real Estate: After retiring from professional football, Cromartie listed his home in New Jersey for $1.7 million. The residence hit the market sometime in 2018. Antonio and his wife initially purchased the home back in 2012 for $1.235 million, which means that he's in for a sizable profit if he can manage to flip the home for its asking price. The home spans almost 10,000 square feet, which includes 20 rooms total with five bedrooms.

The house sits on 3.34 acres of land. Inside, you'll find a magnificent grand foyer with a cathedral ceiling. There's also a marble fireplace, marble countertops, a wine cellar, a dance studio, a playroom, and a koi pond outside. In addition, the residence offers spectacular views of the surrounding mountains.

Another somewhat hilarious real estate-related story emerged in 2016 when it was revealed that Cromartie was evicting his own mother. He had initially purchased the home specifically for her, and she had agreed to pay the mortgage installments from that point onwards. However, Cromartie's mother reportedly stopped making payments in the summer of 2016, causing a dispute. Antonio had purchased the home for his mother back in 2006, and the monthly mortgage payments amounted to about $700 per month. With neither side willing to back down, Antonio issued an eviction notice. This incident becomes a little more understandable when you consider how many children Cromartie has to support.

Relationships: In 2010, Cromartie married Terricka Cason, a celebrity who had once starred on E!'s "Candy Girls." Later that year, the couple welcomed their first child into the world. They subsequently had three more children – two of which were twins. Strangely, Antonio got a vasectomy before the twins were born. He has a total of 14 children with 8 different mothers, and this has led to substantial child support payments over the years. In 2010, he had to request a $500,000 advance from the New York Jets in order to cover delinquent child support payments. Cromartie reportedly spends over $300,000 per year on various forms of child support.