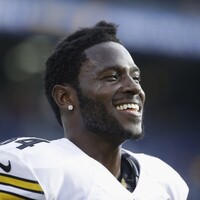 What is Antonio Brown's net worth and salary?

Antonio Brown is an American professional football player who has a net worth of $20 million. As of this writing, Antonio has had $77 million worth of NFL contracts, though that number includes some money that he did not end up earning due to a handful of controversies and personal conduct fines.

Antonio Brown was born in Miami, Florida in July 1988. He is a wide receiver and punt returner who played at Miami Norland High School. Brown played his college football at Central Michigan where he was a two time First-team All-American and a two time MAC Special Teams Player of the Year.

Brown was drafted #195 by the Pittsburgh Steelers in the 2010 NFL Draft and has played his entire career for the Steelers. During his NFL career he won an AFC Championship in 2010 and is a four time Pro Bowl selection and two time First-team All-Pro. Brown was named the AFC Offensive Co-Player of the Year and was the NFL Receiving Yards Leader in 2014.

Antonio played for the Pittsburgh Steelers from 2010 to 2018.

He briefly was a member of the Oakland Raiders in 2019. His time with the Raiders ended before the season started and after he had received $215,000 worth of fines related to altercations with the team's general manager.

On the day he was released from the Raiders, September 9, he signed a one-year deal with the New England Patriots. He practiced with the Patriots and planned to play in Week 2 of the NFL. On September 20, Antonio was cut from the Patriots in the wake of sexual assault allegations.

In the 2020 offseason Antonio indicated he might retire from the NFL. He was ultimately suspended for the first eight weeks of the 2020 NFL season due to violations of the league's personal conduct policy.

In October 2020, Antonio signed a one-year contract with the Tampa Bay Buccaneers. His former New England teammate Tom Brady, who had recently moved to the Bucs, was apparently instrumental in offering Antonio the opportunity. Tampa's coach Bruce Arians also formerly coached Antonio in Pittsburgh. The Bucs went on to win the Super Bowl on February 7, 2021.

In week 17 of the 2021 season, Antonio removed his jersey, shoulder pads and shirt and proceeded to run off the field in the middle of the third quarter. He was subsequently released from the team. 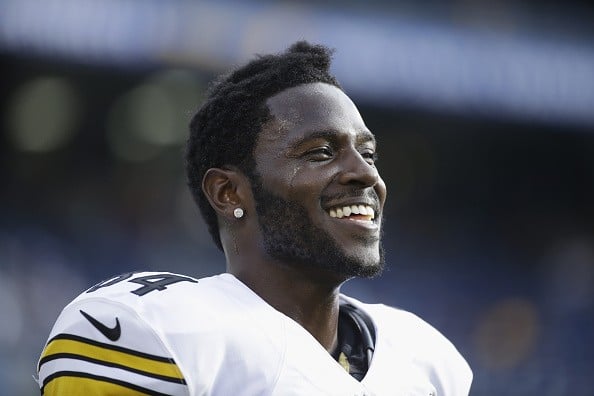 In February 2017, Antonio Brown signed a four-year $68 million extension with the Steelers that paid him $17 million per year on average. That was enough to make him the highest-paid wide receiver in the history of the NFL until one year later when Odell Beckham Jr. signed a deal that paid him $19 million starting in 2018. Two years into this deal, in March 2019, he was traded to the Oakland Raiders with a restructured 3-year $50 million contract. Had all gone to plan, Antonio should have received a $30 million signing bonus.

In August and September 2019, Antonio had several verbal altercations with management of his new team, the Oakland Raiders. On September 7, The Raiders announced they were cutting Brown and were planning to rescind his $30 million signing bonus. Later that very same day Antonio announced that he had signed a 1-year $15 million deal with the Patriots, none of which was guaranteed. So if he got hurt after one play, he would have ended up making an enormous mistake. Was this the plan all along? Was this some roundabout way of Antonio to get off a low-prospect team and on to what might be Tom Brady's last year in the NFL? Time will tell.

Time did tell. On September 20, 2019, two weeks after basically flushing a guaranteed $30 million down the toilet, Antonio was released from the Patriots amid an ongoing sexual assault controversy. The first $5 million installment in his $9 million Patriots signing bonus was due Sept 23. The second installment of $4 million was due on January 15. He was supposed to earn a $1 million base salary and $500,000 game roster bonuses, both of which he almost certainly forfeited. As for the signing bonuses, his contract stated the bonus can be rescinded if Antionio "takes any action that materially undermines the public's respect for, or is materially critical of, the Club's ownership and coaches. Unclear as of this writing if his release on sexual assault charges will render the $9 million null and void. If he does not receive the $9 million signing bonus, Antonio will have gone from $30 million guaranteed to $9 million guaranteed to just $158,333 in total earnings for the 2019 season.

When Antonio joined the Tampa Bay Buccaneers in October 2020, he signed a one-year deal that paid a base salary of $1 million and had $1.5 million worth of performance-based bonus incentives.

In April 2021 Antonio signed another one-year deal with the Bucs. This deal, which could have been worth a total of $6.5 million with benchmarks and milestone bonuses, included a $2 million signing bonus, $916,000 in base salary and $3.1 million in guaranteed money. Antonio forfeited an estimated $1 million worth of bonuses when he stormed off the field in January 2022.

Antonio Brown's total NFL career earnings are $77 million. His first contract with the Steelers paid $1.288 over three years. He earned $393,000 in his rookie year followed by $450,000 in his sophomore year. In 2012, heading into his third NFL year Antonio signed a 5-yeara $42 million extension with the Steelers that upped his earnings for the year to $9 million. His career earnings easily should have topped $100 million without his various controversies.