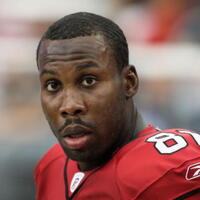 Anquan Boldin net worth: Anquan Boldin is an American professional football player at the wide receiver position for the NFL's San Francisco 49ers who has a net worth of $11 million. Anquan Bolden was born in Pahokee, Florida in 1980 and played quarterback at Pahokee High School so well that he was named Florida's Mr. Football in 1998. During his senior season Anquan Bolden led his team to a 10-0 season, earning him USAToday first team selection and Florida Player of the Year. Anquan Bolden converted to wide receiver in college at Florida State University in order to get more playing time. During 23 games for the Florida State Seminoles, Anquan Bolden caught 118 passes for 1,790 yards and 21 touchdowns. Anquan Bolden was selected in the second round of the 2003 NFL Draft with the 54th overall pick by the Arizona Cardinals, where he played until 2010 when he was traded to the Baltimore Ravens. In 2013, the Ravens traded Anquan Bolden to the San Francisco 49ers in exchange for a sixth round draft pick. During his pro football career, Anquan Bolden has been invited to the Pro Bowl three times (2003, 2006, 2008), the 2003 AP NFL Offensive Rookie of the Year, the 2008 NFC Champion, the 2012 AFC Champion and a part of the Super Bowl XLVII winning Baltimore Ravens team in 2012.