Andre Ware Net Worth: Andre Ware is an American sports analyst and commentator and former professional football player who has a net worth of $1.5 million. Andre Ware was born in Galveston, Texas in July 1968. Ware was a quarterback who attended Dickinson High School and played at the University of Houston.

He became the first African-American quarterback to win the Heisman Trophy in 1989. Ware also won the Davey O'Brien Award in 1989. Ware was the #7 pick in the 1990 NFL Draft by the Detroit Lions where he played until 1993. After a brief NFL career he played in the Canadian Football League for the Ottawa Rough Riders, BC Lions, and Toronto Argonauts where he won the Grey Cup Championship in 1997. In 1999 he played for the Berlin Thunder of the NFL Europe League. Ware is part of the radio broadcast team for the Houston Texans. He has worked on ESPN, ESPN2, and ESPN on ABC. Ware was inducted into the College Football Hall of Fame in 2004 and the Texas Sports Hall of Fame in 2012. 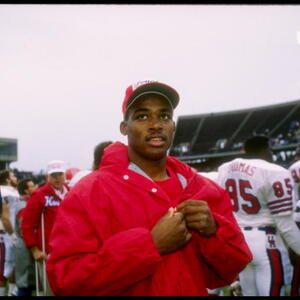