Amani Toomer Net Worth: Amani Toomer is an American retired professional football player who has a net worth of $11 million. Born in 1974 in Berkeley, California, Amani Toomer attended the University of Michigan. Toomer was a highly touted high school prospect at the wide receiver position and earned several All-Big Ten honors while in school.

The New York Giants chose Toomer with the 34th overall pick during the second round of the 1996 NFL Draft. Toomer made his debut later that year and played with the Giants from 1996 until 2008. He won two NFC titles and one Super Bowl (XLII) with the team when the Giants beat the previously undefeated New England Patriots and Tom Brady on February 3, 2008. Following the end of the 2008 season, Toomer landed a one-year deal with the Kansas City Chiefs. He spent about a month with the team but was released prior to the start of the 2009 season. Toomer retired with 668 receptions for 9,497 yards and 54 receiving touchdowns. Since hanging up the cleats, Toomer has worked on TV, making appearances on various NBC Sports programming, including NBC Sports Radio Network and NBC SportsTalk. He runs his own website where he offers his thoughts on his former team's performance during training camp and the season. 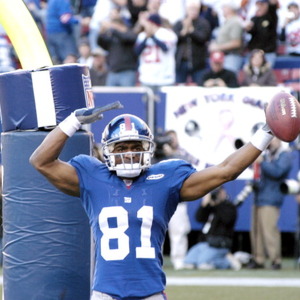