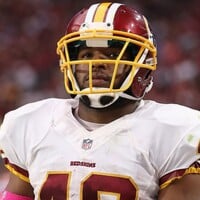 Alfred Morris Net Worth: Alfred Morris is an American professional football player who has a net worth of $2 million dollars. Born in Pensacola, Florida on December 12, 1988, Morris is known for his position as running back for the Washington Red Skins in the National Football League. He attended Florida Atlantic University where he played college football. Morris stands at five feet and ten inches and weighs 218 pounds. Once he was drafted to the Red Skins in 2012, he made the Second-team All-Pro in 2012. He holds the Washington Red Skins All-Time Single Season Rushing Record of 1,613 yards for 2012 and made the 2012 PFW/PFWA All-Rookie Team. Morris also attended the Pro Bowl in 2013 and was recognized as 64th on the 2013 NFL Top 100 Ranking list. Furthermore, he was a three-time Pepsi NFL Rookie of the Week in 2012, as well as NFC Offensive Player of the Week for Week 17 in 2012. His career statistics include 2,888 rushing yards, a rushing average of 4.7, and 20 rushing TDs.