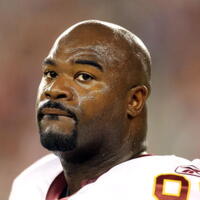 Albert Haynesworth Net Worth and salary: Albert Haynesworth is a former American football player who has a net worth of $45 million. Born Albert George Haynesworth III on June 27, 1981, in Hartsville, South Carolina, he had spent almost a decade on the football pitch playing for four different NFL teams. He first showcased his football skills as a member of the college team at the University of Tennessee. As for his professional career, it started after he was selected 15th overall in the 1st round of the 2002 NFL Draft by the Tennessee Titans. The first seven seasons of his NFL tenure he spent with the Titans, where became "the most dominant defensive tackle in the league" and highly coveted free agent following the 2008 season. In February of 2009, he inked a seven-year, $100 million contract with the Washington Redskins, but he spent only two seasons with the team. He wrapped up his career with brief terms with the New England Patriots and Tampa Bay Buccaneers in 2011. Unfortunately, Albert Haynesworth had no option but to retire from the sport being widely regarded as the worst free agent signing in NFL history at the time.