Aeneas Williams Net Worth: Aeneas Williams is an American retired professional football player who has a net worth of $50 million. Aeneas Demetrius Williams was born in New Orleans, Louisiana in January 1968. He played football at the Alcee Fortier High School. He attended Southern University and focused on academics until he started to play football his junior year.

He tied the record for most interceptions for NCAA Division I-AA. After only playing one year in college Williams was drafted #59 by then Phoenix Cardinals in 1991. He played for the Phoenix/Arizona Cardinals from 1991 until 2000 and was traded to the St. Louis Rams where he played from 2001 to 2004. During his career Williams was selected to the Pro Bowl eight times. He was a four time First-team All-Pro and a one-time Second-team All-Pro. He won the NFC Championship and appeared in the Super Bowl in 2002 as a member of the St. Louis Rams. Aeneas was named the Bart Starr Man of the Year Award in 1999 and was selected as a member of the NFL 1990s All-Decade Team. He was selected to the St. Louis Rams 10th Anniversary Team and is part of the Arizona Cardinals Ring of Honor. Williams was inducted into the Pro Football Hall of Fame in 2014. He is the founding pastor of Spirit of the Lord Family Church in St. Louis. 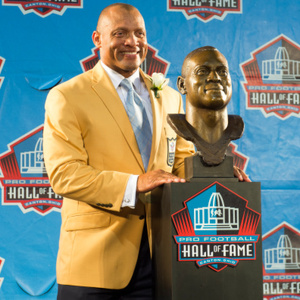