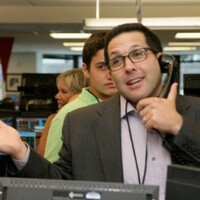 Adam Schefter net worth and salary: Adam Schefter is an American sports writer who has a net worth of $4 million dollars and a salary of $1.2 million per year. Born in Valley Stream, New York, Adam Schefter graduated from the University of Michigan, and then went on to graduate from the Medill School of Journalism at Northwestern University. After completing an internship in Seattle, he relocated to Denver, Colorado, where he worked for the Rocky Mountain News, and was subsequently hired by The Denver Post. He began working as part of ESPN's "The Sports Reporters". He then became a regular substitute for Woody Paige on ESPN's show, "Around the Horn". He officially joined the NFL Network in 2004, working as both an analyst and a writer for NFL.com. He also worked as a sideline reporter for NBC occasionally. By 2009, he had become the most popular sportswriter and analyst in the United States, and ESPN quickly grabbed him from the NFL Network. He currently works for both ESPN and ESPN radio.