How much is Aaron Brooks Worth?

Aaron Brooks Net Worth: Aaron Brooks is a retired American professional football player who has a net worth of $12 million. Aaron Brooks was born in 1976 in Newport News, Virginia, and played college football close to home for the University of Virginia Cavaliers. The Green Bay Packers drafted Brooks with the 131st overall pick during the fourth round of the 1999 NFL Draft. Brooks did not play with the Packers, and instead made his NFL debut in 2000 as a member of the New Orleans Saints. He remained in New Orleans until 2005 when he joined the Oakland Raiders in 2006. Brooks, a quarterback, announced his retirement in 2007. At the time of his hanging of the cleats, Brooks was the Saints' all-time leader in touchdown passes for both single-season and his career. Both records have been shattered by Drew Brees. Brooks led the NFC in passing touchdowns during the 2002 season and was a three-time NFL FedEx Air Player of the Week during his career. He finished his career with 123 touchdown passes to 92 interceptions to go along with more than 20,000 passing yards and an overall quarterback rating of 78.5. After his retirement, Brooks began working in land development in the Virginia area. He is a cousin of fellow NFL player Michael Vick. 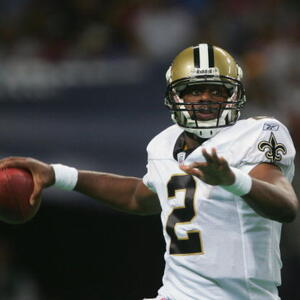