How much is Žydrūnas Ilgauskas Worth?

Zydrunas Ilgauskas Net Worth: Zydrunas Ilgauskas is an American former professional basketball player who has a net worth of $55 million. Born in Kaunas, Lithuania, in 1975, Zydrunas Ilgauskas first began his professional basketball career in his home country in 1993. Three years later, the Cleveland Cavaliers chose Ilgauskas with the 20th overall pick during the 1996 NBA Draft. His early tenure with the Cavs was marred by injuries and he barely spent time on the court until the 2003 season when the team drafted phenomenon LeBron James. Ilgauskas remained healthy for the next few seasons and earned a contract extension worth a reported five years and $55 million. He remained with the Cavs until early 2010 when he was traded to the Washington Wizards. A few days later, the Wizards made Ilgauskas a free agent and he landed a one-year deal with the Cavs. Following the end of the season, he signed a one-year, $1.3 million deal with the Miami Heat to play alongside James, Dwyane Wade, and Chris Bosh. Despite appearing in the championship, the Heat lost and Ilgauskas retired following the end of the season. He accepted a position as assistant to the Cavs' general manager in early 2011. His number has since been retired by his original team. Ilgauskas, who also played on the Lithuanian national team, is a two-time NBA All-Star. 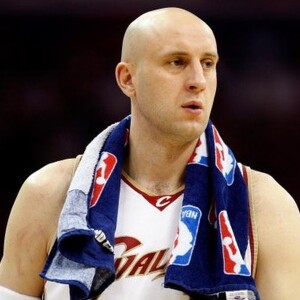