Zach Randolph net worth and salary: Zach Randolph is an American professional basketball player who has a net worth of $85 million. Zach Randolph was born in Marion, Indiana in 1981 and played high school basketball at Marion High School where as a power forward, he helped lead his team to the 1998 Indiana Class 4A State Championship Game. Zach Randolph went on to play for Tom Izzo at Michigan State University where in his freshman season he helped lead the Spartans to the NCAA Final Four. Opting for a one and done collegiate career, Zach Randolph entered the 2001 NBA Draft after his freshman season and was selected by the Portland Trailblazers in the first round with the 19th overall pick. Zach Randolph has played for four teams so far in his professional career in the NBA. He was with the Portland Trailblazers from 2001-2007, the New York Knicks from 2008-2008, the Los Angeles Clippers from 2008-2009, and since 2009 he has been with the Memphis Grizzlies. Zach Randolph has been selected to the NBA All-Star team twice in 2010 and 2013, was chosen All-NBA Third Team in 2001, and was named the NBA's Most Improved Player in 2004. As of 2018, Zach Randolph has earned $185 million in NBA salary alone. That's enough to make him one of the 20 highest-earning players in NBA history. 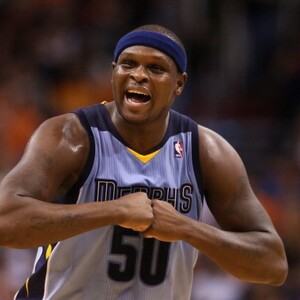