While playing college basketball he played bass guitar at his father's church. He graduated form Booker T. Washington High School and played for the University of Oklahoma. Tisdale was a three time Big Eight Player of the Year and consensus first team All-American from 1983 to 1985. He won a gold medal as part of the 1984 United States Olympic basketball team coached by Bobby Knight. Wayman's #2 was honored by the University of Oklahoma. He was drafted #2 by the Indiana Pacers in the 1985 NBA Draft. During his NBA career Tisdale played for the Pacers, Sacramento Kings, and Phoenix Suns. He finished his career with over 12,000 points, 5,000 rebounds, and 1,000 assists. Tisdale released his debut studio album Power Forward in 1995. He recorded eight albums including 2001's Face to Face which reached #1 on the Billboard contemporary jazz chart. He was diagnosed with cancer in his knee in 2007 and later had to have part of his right leg amputated. Wayman was married to his wife Regina and the couple had four children together. Wayman Tisdale passed away in May 2009 at the age of 44. 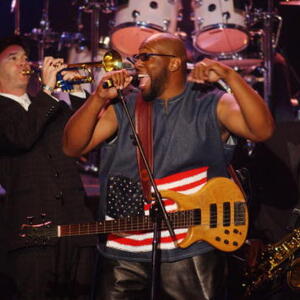