Wally Szczerbiak net worth and salary: Wally Szczerbiak is a retired professional basketball player who has a net worth of $35 million. Wally Szczerbiak stands 6 feet 7 inches tall and weighs 244 pounds. He was born in Madrid, Spain on March 5, 1977 while his father, Walter, was playing for Real Madrid. He spent much of his childhood in Europe during his father's professional basketball career. When his father retired, the family moved back to Long Island, New York where Wally attended high school in a hamlet on Long Island called Cold Spring Harbor.

In college, Wally Szczerbiak played for Miami University in Oxford, Ohio. While there, he majored in marketing and graduated from the Richard T Farmer School of Business. He was named a first team All-American, and second team All-American in 1998-99. During that same year he was named MAC Player of the Year. In 1999, Wally Szczerbiak was drafted sixth overall. His best year as a pro was in 2002 when he was a coaches' selection to the Western Conference All-Start Team. He had a rough couple of seasons from '04-05, but in the '05-06 season, the former All-Star returned to the starting role.

In January of 2006, Szczerbiak was traded to the Boston Celtics. During the 2006 offseason he underwent knee surgery to fix a knee that had been injured for several months. In the '06-07 season, Wally Szczerbiak played well early on, including a 35-point performance against the Charlotte Bobcats early in the season. Unfortunately, he was soon plagued by several injuries to both ankles that greatly affected his performance; he ultimately he decided to have surgery on both of his ankles. In June of 2007, the Celtics traded him to the Seattle SuperSonics. Then, in February of 2008, Szczerbiak was traded again from the SuperSonics to the Cleveland Cavaliers. He played in 25 regular season games with the Cavaliers, and during the playoffs took over as a starter playing at the #2 spot. Wally helped the Cavaliers get past the first-round of the 2008 NBA Playoffs and averaged 10.8 points a game. During the offseason, Szczerbiak's contract ran up and was not renewed by the Cavaliers, making him a free agent.

On November 5, 2009 Szczerbiak revealed that he had a third surgery performed on his left knee three weeks earlier, and as a result his career could be coming to an end. A week later, he reportedly rejected a contract offer from the Denver Nuggets, opting instead to continue to rehabilitate from the knee surgery. Wally Szczerbiak and his wife Shannon have 3 children, two girls and a boy. After his playing career, he became a basketball analyst for CBS College Sports. He then joined the MSG Network to cover the New York Knicks as a contributor to the post-game show. 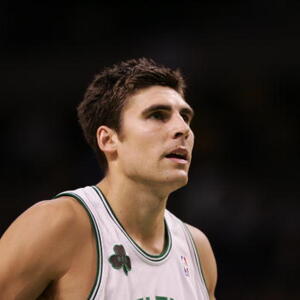