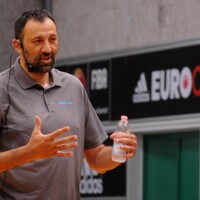 What is Vlade Divac's Net Worth?

Vlade Divac is a Serbian professional basketball executive and former player, known for his tenures playing for the NBA's Los Angeles Lakers, Charlotte Hornets, and Sacramento Kings, the latter of which he later managed. Notably, he is the first player born and trained outside the United States to play in over 1,000 NBA games. In Serbia, Divac played for the teams Sloga, Partizan, and Crvena zvezda.

Vlade retired in 2005 and began working to help scout talent overseas with the Lakers. The Kings retired his number 21 jersey. He finished his career with 13,398 points, 9,326 rebounds and 1,631 blocks.

Vlade Divac was born on February 3, 1968 in Prijepolje, Serbia, then part of Yugoslavia. As a teenager, he began playing basketball for the team KK Elan. Divac subsequently played for Sloga. The top star of the basketball transfer season in 1986, he then signed with KK Partizan. Divac had his breakthrough with the team in the subsequent season, winning the Yugoslavian League title.

In 1989, Divac was drafted by the NBA's Los Angeles Lakers; he went on to become one of the first European players to achieve major success in the league, and was selected to the NBA All-Rookie Team in his first season. Notably, he developed a reputation for "flopping," tricking officials into calling a foul on the opposing team by deliberately falling upon innocuous contact with a rival player. Divac played with the Lakers through 1996.

Following his first tenure with the Lakers, Divac was traded to the Charlotte Hornets. He played on the team for two seasons, and then signed with the Sacramento Kings in 1999 as a free agent. Alongside his countryman Peja Stojaković, Divac played for six seasons with the Kings; moreover, alongside Chris Webber, Mike Bibby, and Hedo Türkoğlu, they helped to revitalize the franchise. The Kings rose in the ranks of the NBA during this time, becoming regular playoff contenders and eventually a championship contender. Memorably, the team competed against the Lakers in a controversial seven-game playoff series in 2002, which the Lakers won.

Return to the Lakers and Retirement

Divac became a free agent following the 2003-04 NBA season. He went on to sign a two-year contract with the Lakers, marking his return to the team. However, Divac was beset by back problems, and was unable to play for most of the ensuing season. Even when he was able to play, he could only manage to play about nine minutes per game, ultimately playing in a total of 15 games across the season. In 2005, Divac announced his retirement after 16 years in the NBA. 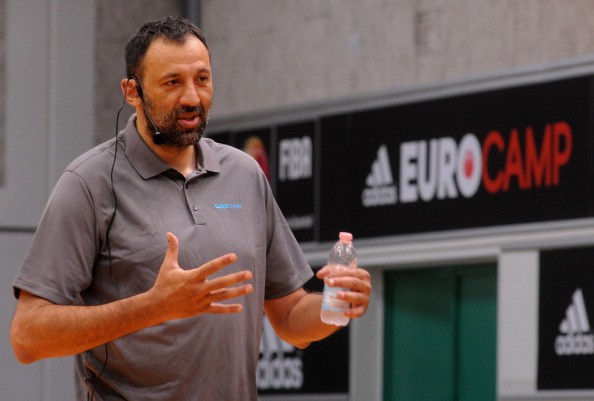 During the NBA lockout in 1998-99, Divac played two games for the Serbian team Crvena zvezda. In his debut, he helped the team notch a 77-69 upset win over the favored Žalgiris. Despite his success, Divac was called a traitor by many fans of KK Partizan, the rival team for which he formerly played. Upon his later return to Partizan as club president, he said that his choice to play for Crvena zvezda was a mistake.

During his NBA career, Vlade Divac earned $93 million in salary.

As a basketball executive, Divac took over his former club KK Partizan with his former teammate Predrag Danilović in 2000. He became the president, with Danilović taking on the role of vice president. In 2006, Divac became the head of operations at the Real Madrid basketball club, a role that was soon reduced to consulting. A few years later, he was elected president of the Olympic Committee of Serbia.

In 2015, Divac became the vice president of basketball and franchise operations for his former team the Sacramento Kings. In this position, he began advising the front office and coaches as well as assisting with fan outreach and marketing. Soon, Divac was promoted to general manager of the Kings, a position he held until 2020.

With his wife Snežana, Divac has two sons named Luka and Matija; they also have an adopted daughter named Petra.

Divac is significantly involved in philanthropic work, particularly in Africa and his native Serbia, where he works to aid children and refugees. Along with some of his fellow Serbian basketball teammates, he created the charity Group Seven, later renamed Divac's Children Foundation, which raises money for humanitarian assistance in Serbia. Divac also established the humanitarian organization You Can Too, which works to restore abandoned homes to provide shelter to homeless individuals and refugees.