Vin Baker Net Worth: Vin Baker is a former American professional basketball player who has a net worth of $500 thousand. Born in Lake Wales, Florida, in 1971, Vin Baker is a six-foot-eleven power forward and center. He played college basketball at Hartford from 1989 until 1993 and earned America East Conference Player of the Year honors during his final season.

The Milwaukee Bucks chose Baker with the eighth overall pick of the 1993 NBA Draft. He played with the Bucks until 1997 and later spent time on the Seattle SuperSonics, Boston Celtics, New York Knicks, Houston Rockets, and Los Angeles Clippers. Baker was on the all-rookie first team in 1994 and was named an NBA All-Star for four straight seasons between 1995 and 1998. He finished his career with 11,839 points, 5,867 rebounds, and 1,509 assists. Baker played for the U.S. men's national team, earning a gold medal at the 2000 Olympic Games in Sydney, Australia, and a gold medal at the 1999 FIBA Americas Championship in San Juan. Baker battled alcoholism and was arrested in 2007 for alleged drunk driving. He created his own non-profit organization, the Stand Tall Foundation, designed to help children grow up to be successful. Baker was part of Dennis Rodman's diplomacy efforts with North Korea in 2014. In July 2015, it was revealed that Vin had blown through his entire NBA fortune through bad relationships and bad investments and was now working at Starbucks. That's a pretty shocking fall for a guy who earned $97 million during his career in from salary alone. He may have gotten back on track in 2017 when he became the head of the basketball department at Camp Greylock and joined Fox Sports as a commentator. 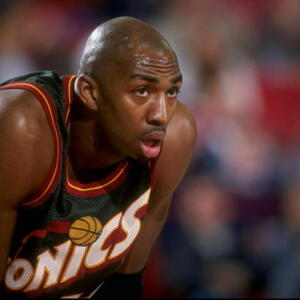