Victor Oladipo net worth: Victor Oladipo is an American professional basketball player who has a net worth of $40 million. Victor Oladipo was born in Silver Spring, Maryland in May 1992. He is a 6'4″ shooting guard and point guard who played at DeMatha Catholic High School. Oladipo played his college basketball at Indiana where he was first-team All-Big Ten and Big Ten Defensive Player of the Year in 2013. He was also a two time Big Ten All-Defensive team selection and a consensus first-team All-American in 2013. Victor Oladipo was the Sporting News Player of the Year and Adolph Rupp Trophy winner in 2013. He was drafted #2 overall in the 2013 NBA Draft by the Orlando Magic. Oladipo played for the Magic from 2013 to 2016 and for the Oklahoma City Thunder from 2016 to 2017. In 2017 he joined the Indiana Pacers. He was a member of the NBA All-Rookie First Team in 2014 and in 2018 he was an NBA All-Star and the NBA steals leader. 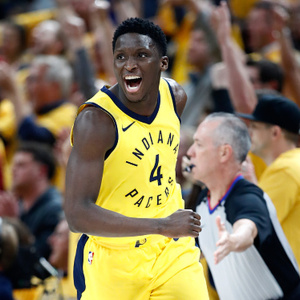