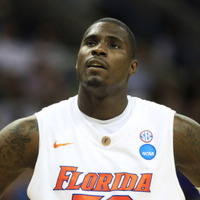 Vernon Macklin net worth: Vernon Macklin is an American basketball player who has a net worth of $500 thousand dollars. Born in Portsmouth, Virginia, Vernon Macklin attended I.C. Norcom High School and the Hargrave Military Academy. He excelled in basketball at both schools, eventually being named a McDonald's All-American. He began his college basketball career playing for Georgetown University, and then transferred to the University of Florida where he played two successful seasons. He graduated with a B.A. in Sociology in 2011, and was subsequently drafted by the Detroit Pistons. He began playing for the Fort Wayne Mad Ants in the NBA D-League in March of 2012, and then joined the Pistons again from April to July 2012. He became a free agent in July, and subsequently signed with Royal Halı Gaziantep, a team in the Turkish Basketball League, a month later. He played for the team through the fall, but was released from his contract in November 2012. He is currently a free agent again. Vernon Macklin is currently dating Basketball Wives reality star Brooke Bailey.