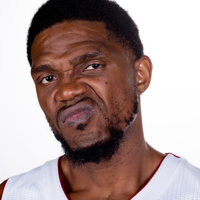 Udonis Haslem net worth: Udonis Haslem is an American professional basketball player who has a net worth of $20 million. Udonis Haslem has played his entire career for the Miami Heat, as a Power Forward. Udonis Haslem was born in Miami, Florida in 1980. He attended Wolfson Senior High School in Jacksonville Florida and Miami Senior High School in Miami, Florida. He participated in basketball and football at Wolfson Senior High, but suffered a knee injury which ending his football playing, but he still continued in basketball. He also played for the Miami High Stinger Rays who won two State Championships and was named player of the year for the 6a division. He attended college at the University of Florida where he played the position of starting center, and was selected as All Sec for four years. He was awarded a spot as a "Gator Great" at the University of Florida's Athletic Hall of Fame in 2012.He was a late pre-season roster cut with the Atlanta Hawks in 2002 and signed with the Miami Heat in 2003 as an undrafted rookie. He became a Power Forward in 2004 and was considered a tough rebounder who developed a super 15 foot jump shot. In his second season he raised his rookie averages to 10.9 points and 9.1 rebounds, a big jump from 7.3 and 6.3. In 2006 Haslem scored 17 points against the Dallas Mavericks, winning the NBA Championship with the Miami Heat. In the win over the Nets, he scored 28 points and was had nine rebounds. In 2006 Haslem was ejected for a lewd gesture. During his career so far, he has earned more than $55 million in salary.