Tyson Chandler Net Worth and salary: Tyson Chandler is an American professional basketball center who has a net worth of $85 million and an annual salary of $13.1 million. Tyson Chandler was born October 2, 1982 in Hanford, California. During his career he has played for several teams including the Dallas Mavericks, Phoenix Suns and the Chicago Bulls.

He began playing basketball at the of age of three on a rim that his grandfather Cleo affixed to a tree. Years later, Tyson Chandler would tell a media source that his grandfather was his best friend. Tyson's mom and grandmother did much to mold his personality. During his childhood he was taught a strong work ethic. Chandler milked cows, slopped pigs and worked in the fields. By the time Chandler was only nine years old, he had grown to be almost 6 feet tall. He continued to grow and by the time he was 11 he already stood 6′ 4″. One Halloween, a neighbor refused to give him candy because they didn't believe Tyson was a kid. But everything changed for him when he turned his height into an advantage and took the basketball world by storm-though not before working through his awkward stage of trying to figure out with to do with those four, gangly limbs. Chandler made the decision to skip college and go straight for the pros. He was picked second in June of 2001 by the Los Angeles Clippers – but was immediately traded to the Chicago Bulls where he played 2001 to 2006. He went on to play for the New Orleans Hornets (2006-09), the Charlotte Bobcats (2009-10), the Dallas Mavericks (2010-11), the New York Knicks (2011-2014) then back to the Mavericks in 2014 and on to the Phoenix Suns in 2015. As a player in general, Tyson Chandler is considered an intense and highly effective interior defender. He is quick and instinctive and has learned to curtail unnecessary fouls.

He is also considered a natural rebounder. Tyson Chandler has been compared to Dennis Rodman in the sense that Chandler feels every ball on the glass is 'his. He is adept at spotting a seam and taking interior passes and alley-oops from the veteran guards. He may only attempt a handful of shots a game, but often his baskets are attention-grabbers. As of September 2018, Tyson Chandler has earned more than $170 million in salary alone. That's enough to make him one of the 20 highest-earnings players in the history of the NBA. 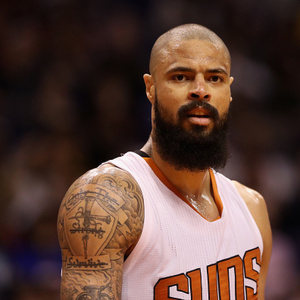