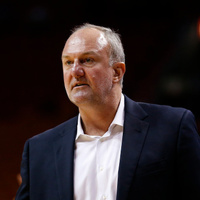 Thad Matta Net Worth and salary: Thad Matta is an American college basketball coach and the current head coach of the Ohio State Buckeyes men's basketball team who has a net worth of $12 million dollars. His salary per year at Ohio State is $3.5 million dollarsThad Matta was born July 11, 1967 in Hoopeston, Illinois where he was basketball standout for the Cornjerkers at Hoopeston-East Lynn High School and a two-year starter for the Butler University Bulldogs in three seasons after transferring from Southern Illinois University as a sophomore. Matta began his coaching career at Indiana State University in 1990–91. His assistant coaching career took him to Miami University from 1994-95 and 1996-97, and Western Carolina University in 1995-96. He also returned to Butler University's staff in 1997 as their primary recruiter and helped the Bulldogs to three consecutive 20-win seasons. Matta became Butler's head coach in 1999-2000. He was named 2000–01 Midwestern Collegiate Conference Coach of the Year in his first and only season after leading the Bulldogs to a school record 24 wins. From 2001-04 Matta was head coach at Xavier, where he led the team to three consecutive 26-win seasons, and an Elite Eight appearance in the 2004 NCAA tournament. Matta was hired as the 13th head coach in Ohio State history on July 7, 2004.