How much is Tayshaun Prince Worth?

Tayshaun Prince net worth: Tayshaun Prince is an American professional basketball player who has a net worth of $25 million dollars. Tayshaun Prince was born in Compton, California, and distinguished himself as a college player, playing for the Wildcats at the University of Kentucky. The team advanced to the NCAA Tournament all four years Tayshaun Prince played on the team, but they were never able to make it to the finals. However, he was awarded SEC Player of the Year honors during his third year. They also won the SEC Tournament in 1999 and 2001, and he was the 2001 SEC Tournament MVP. After graduating from college with a degree in Sociology, he was drafted by the Detroit Pistons. He played in few regular season games his first year on the team, but when he was added to the rotation during the playoffs, he quickly grabbed the attention of the nation, scoring more points in the playoffs than he did in all of his regular season games, and helping the Pistons to decisive wins. He played well for the Pistons through 2013, distinguishing himself as one of the best defensive players in the league. In 2013, he was traded to the Memphis Grizzlies. 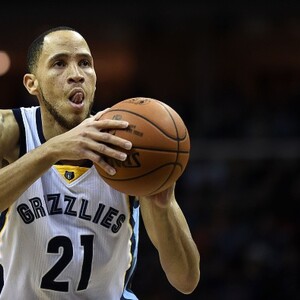