How much is Tate George Worth?

Tate George net worth: Tate George is an American former professional basketball player who has a net worth of $1,000. He is unfortunately best known for being involved in a Ponzi scheme.

Tate George was born in Newark, New Jersey in May 1968. He was a 6'5″ point guard who played at Union Catholic Regional High School. George played his college basketball at UConn. He was drafted #22 overall by the New Jersey Nets in the 1990 NBA Draft. Tate George played for the Nets from 1990 to 1993. He played for the Quad City Thunder of the CBA from 1993 to 1995. He then played for the Milwaukee Bucks in the NBA in 1995 and played for the Thunder again that year. George went back to the CBA and played for the Connecticut Pride from 1995 to 1996, the Rockford Lightning from 1996 to 1997, and the Fort Wayne Fury in 1997. He founded the real estate development firm The George Group and was found guilty on four counts of federal wire fraud in 2013. He was sentenced to nine years in prison and $2.5 million in restitution in 2016. 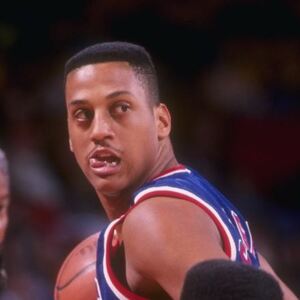