Tamika Catchings Net Worth and salary: Tamika Catchings is an American professional basketball player who has a net worth of $300 thousand dollars. Tamika Catchings was born in Stratford, New Jersey in July 1979. At Duncanville High School in Texas she was a WBCA All-American and was the first player in history and only one of two players ever to record a quintuple-double.

She attended the University of Tennessee and was an All-American and was part of the undefeated National championship team as a freshman. In 2001 Catchings was drafted by the Indiana Fever of the WNBA. In 2002 she was named the WNBA Rookie of the Year. Over her career Catchings has been a WNBA All-Star nine times and a WNBA Defensive Player of the Year five times. She is a two time Kim Perrot Sportsmanship Award winner and was named the WNBA Most Valuable Player in 2011. In 2012 she won her first WNBA Championship with the Fever and was named the WNBA Finals MVP. Tamika has also been named as a member of the All-Decade Team and Top 15 Team. She has also represented the United States in international competition and won three Olympic Gold Medals. 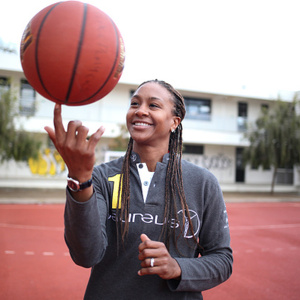