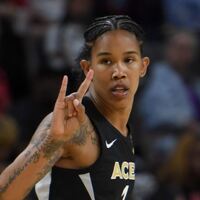 Tamera Young net worth: Tamera Young is an American professional basketball player who has a net worth of $500 thousand. Tamera Young was born in Wilmington, North Carolina in October 1986. She played at Laney High School where Michael Jordan graduated from. Young played her college basketball at James Madison where she was a three time First-team All-CAA selection and CAA Player of the Year and an AP honorable mention All-American in 2008. Tamera Young was drafted #8 overall by the Atlanta Dream in the 2008 WNBA Draft. She played for the Atlanta Dream from 2008 to 2009. Young played for the Chicago Sky from 2009 to 2017. She played for the Atlanta Dream again in 2017 and joined the Las Vegas Aces in 2018. Young ahs also played professionally in Latvia, Turkey, France, and Israel and won the Brazilian championship with America de Recife in 2014. She set many records in college including the all-time scoring record for the Colonial Athletic Association.